Careful amigo! Narcos™ slot is a game filled with characters who live in a world of danger, fast money and all manner of vices. Keep your head down, because these guys don’t mess around. Focus on the Narcos Slot

How to play Narcos

There’s no rest for the wicked in this action-packed slot. If you really are willing to dip your feet into the dark underworld of 1970s Colombia, where Pablo Escobar reigned supreme, then, by all means, give the Narcos™ slot a spin. Vaya con dios!

The Narcos™ slot – a five-reel, three-row video slot with 243 bet ways – is based on the global hit Netflix series Narcos. The show focused on the agents hunting down infamous crime boss Pablo Escoba. Choose your bets and hit spin to join in the chase and unlock big wins as you try to put Escobar behind bars. Be on the lookout for the special features if you want to win the big prizes.

There are ten different paying symbols in the game, including playing card symbols at the bottom of the paytable. Higher paying symbols include a plane used to smuggle contraband, Escobar’s flamingos and the various characters from the show. These include the two agents Peña and Murphy who are tasked with bringing Escobar to justice.

If you want to get ahead in Narcos, you’ll have to make use of the different features on offer. These include the following:

In the Narcos slot, wild symbols can be found during the base game and the free spins round. You’ll recognise these as the DEA badge, and they’ll help you to form wins by substituting for other symbols.

On top of regular wilds, the game also introduces the player to the walking wilds. These special symbols will act the same as wilds. Only when they form a win, they’ll stay on the reels and move one place to the left. These can be a big boost to your winning chances, helping you to form big wins for multiple spins.

This feature can randomly trigger at any point during the base game. A car will speed by the reels and transform several high pay symbols into wilds.

Three scatter symbols across the reels will unlock the Narcos free spins round. Players will receive ten free spins, but walking wilds can prolong the feature. During this round, high paying symbols have a high chance of turning wild, leading to bigger wins.

Even if you’ve never watched the show before, Narcos slot is brilliant fun. We’ve made sure to include lots of different features for you to enjoy with the locked feature being one of our favourites. Narcos are running rampant all over our collection of video slots. Look through the list. And don’t forget to look through our casino bonus offers. The Narcos loved them, and you will too!

If you’d prefer to try the game out before risking your own money you can. Narcos is available to play for free right here on this page. Take a look at our demo version of the game and see what you think!
Narcos is easy enough to win thanks to the 243 betways. Wins are paid out in a combination of three or more, and the two DEA agents are the highest paying symbols in the game. Unlock the special features to land some big wins with the locked up feature potentially paying out big multiplier bonuses.
You need to be on the lookout for the scatter which can show up anywhere during the base game. Landing three scatters on a single spin will take you to the free spins bonus round. You’ll get ten free spins, and there’s a higher chance of premium symbols turning wild.

To celebrate, we’re giving you an exclusive interview with the team responsible for bringing this exciting shoot-out of a game to life! We talked to Art Director Matthew Butler and Game Production Lead Johan Stenlund, who were kind enough to give us a behind-the-scenes look at the big wins and challenges of working on such a high-profile branded slot. Can you share some insights about the inspiration behind the game?

Trying to build the game around a whole TV series is quite tough, especially since Narcos has such varied settings, characters, and timelines. We had to pick out characters and settings that would complement the gameplay, be recognizable to the player, and fit the story arc from the show. We also had the added challenge of making sure the actor talent liked their character portraits and that they fit into the game we were designing.

Can you give a brief recap of the overall game development process?

The look and style of the game we chose was more stylized, a mix of 3D and hand-drawn. We didn’t want to use film or photographs in the game; we wanted to take the Narcos title further out to a gaming audience, one that would be more familiar with AAA gaming consoles. We think the style and gameplay will be just as enticing to our huge online casino audience, of course.

We also toned down the violence and narcotics of the series. We tried to make it a bit more subtle to add a lighter feel to the game. After all, it’s a slot! You’re going to be winning a load of cash as you’re hunting Pablo.

We tried to play on the good versus evil theme that runs through the story. Pablo may have been a saint to some people, but let’s not forget he was a ruthless and dangerous criminal to most. But we leave it up to the player to decide which symbols to watch for. Both the Pablo Lock Up and the DEA Wild give exciting results and huge potential wins! Steve Murphy Slot Symbol as found in the game

What will the players and operators enjoy the most? What in the game will make Narcos a strong NetEnt brand? Any new features or something else?

Johan, Game Production Lead
The brand itself is, of course, a very strong and well-recognized brand. The game has a lot of features and fun things that it brings to the table:

In the main game you have walking wilds, which will hopefully make the game sticky. When you win on a wild, it will walk to the next reel on the player’s next spin. That gives the player an incentive to spin again and see what the wild will give them this time. And since the game is a betways game, the wilds are very powerful! 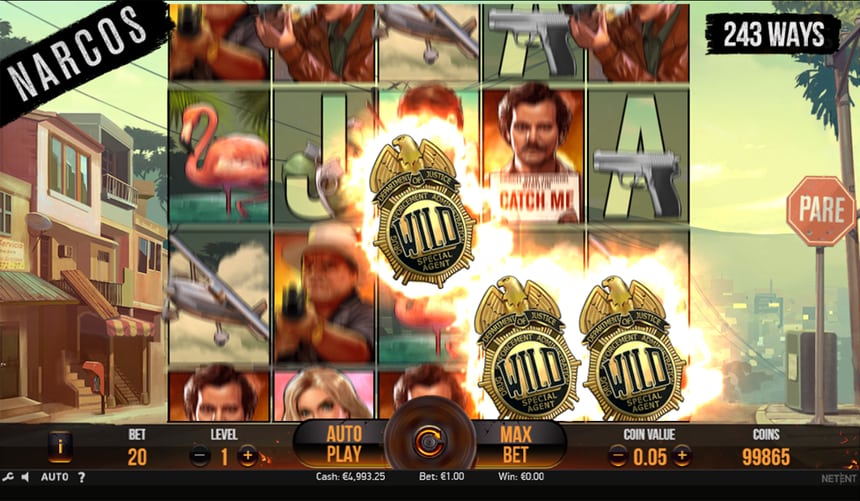 Wild Symbols as found in the game

The lockup feature—which can be triggered by landing three or more Pablos on the same row—is also very exciting, especially after we added the golden suitcases for big random prizes. The nice thing here is that the player will see suitcases landing but not always lock them in, which will help emphasize the high potential of this super volatile game mode. The free spins take place against the backdrop of a big shootout right out of the show’s first season. In this feature, the power of the walking wilds comes into play again. The cool thing here is that the feature will continue even after the number of free spins has played out as long as there are walking wilds on the screen. Since any spin can bring more walking wilds into play, the feature can go on for a very long time. The Free Spins layout from the game

One fun thing is that the phone booth on the left side of the main game can actually ring. At first, it would play a ringing sound from time to time, but in the end we felt it was a bit too obnoxious. Now it will just flash instead, and quite rarely at that. If the user clicks on the phone while it’s flashing, a voice that sounds like Pablo will answer. The voice-over for this was done in our studio by one of our artists who is from Spain.