Move the cursor around. Get comfy. Adjust the bet-level, coin-value, and sit back and enjoy Temple of Nudges™ slot a fantastic addition to our collection of online slots. 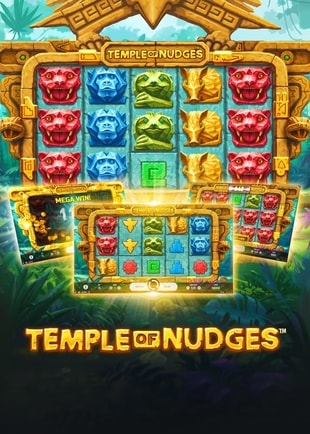 Jungle-themed slots are something we’re great at. Thick foliage, the spin-button, animal symbols: no one does the jungle theme quite like us. Temple of Nudges™ video slot is a 5×3 video slot with 243 betways. The game has a nudge feature and a respins feature, which work together for maximum excitement. There are 8 regular symbols plus overlay versions of the regular symbols (16 symbols in total).

During the Re-Spin feature, all symbols of the same type as the winning symbol stay on the reels and all other symbols re-spin. The re-spin feature is activated if the re-spin overlay appears on a symbol during a winning game round.

Head over to our collection of online bonus offers and see what you find!

The birds are chirping, the bees are buzzing, and the jungle is alive with swaying leaves and babbling streams. But who cares about all that?! Give your fortune a nudge and get yourself some of that ancient gold (maybe, hopefully).