Venture into the woods to uncover magical treasures and fairy magic. Read on to find out all you need to know about Fairytale Legends: Red Riding Hood, available to all Canadian slot fans. 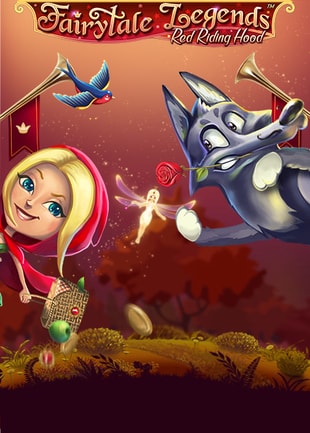 Step into the shoes of the iconic fairytale character Little Red Riding Hood as she navigates the enchanted forest with a little bit of help from a very generous fairy godmother. This 5-reel, 20-payline slot features stunning animations and some truly spellbinding bonus rounds. Read on to find out more about Fairytale Legends: Red Riding Hood, produced exclusively by NetEnt.

Here at NetEnt, we like to keep things simple with our online slots. That’s why we have designed the betting rules of Red Riding Hood to be as user-friendly and customizable as you could want them to be. As you step into the enchanted forest and begin to help Red Riding Hood on her merry way, you will be able to adjust the betting level and coin value before you play. The betting level can be set from 1 to 10 via the toggle button at the bottom of the screen, while the coin value can be set between 0.01 and 1.00. In practice, this gives you a minimum wager of 20 cents and a maximum wager of $200 per spin. With a maximum jackpot of up to 400x your original stake, this means that you could walk away with an $80,000 payout from a single spin!

The gameplay of Red Riding Hood is as idyllic and enchanting as the original story itself. This is a true fairytale story that puts you straight into the shoes of the famous hooded protagonist. Stroll with her in the enchanted forest and see which treasures await you, as gorgeous animations and a soothing soundtrack guide you on your journey. This high-quality slot has also been seamlessly adapted for mobile, allowing you to play Red Riding Hood on the go.

Not all symbols in Red Riding Hood are created equal. The highest-paying symbol is the Fairytale Legends logo, which awards 400 coins for five of a kind on an active payline. Other high-paying symbols include the crown, the magic key, the pink rose, and the book of spells. Lower-paying symbols take the form of classic playing cards and include aces, kings, queens, jacks, and tens. Meanwhile, wilds are represented by Miss Riding Hood herself, while the bonus symbol takes the form of a gilded treasure chest.

Since we love a good casino bonus, we thought we’d fill this slot with more bonuses than virtually any other slot game out there. The first bonuses you need to bear in mind are the Red Riding Hood wilds, as two or more of these on the reels will instantly trigger a free re-spin, in which the wilds remain sticky throughout. Then there are the random bonuses, which are gifted completely by chance whenever the fairy godmother makes an appearance on the screen. She could grant you the Fairy Magic Spin, in which a random cluster of 5 to 9 medium-value symbols overlay the reels for a spin. She could cast the Fairy Surprise spell, in which all lower-paying symbols are instantly transformed into one specific medium-paying symbol. Perhaps she will provide the Fairy Wild Spin, in which three or four wilds are placed on the reels for a respin.

Then there are the bonus features, which are hidden within the treasure chests that appear on the reels. These could either give you instant coin wins or free spins, or they could activate the Beware the Wolf Bonus. In Beware the Wolf, you are transported to a board game and your job is to move your character around to collect as many coins as possible, but avoid the big bad wolf!

This is a game that awards courage, so don’t be afraid to face off the wolf in your pursuit of free coins and multipliers!

Red Riding Hood is chock-full of bonus features that offer countless opportunities for freebies and massive wins.
Red Riding Hood is available at many Canadian online casinos. All you need to do is type the name into the search bar, and you’re ready to spin.