Back of the net! Here’s a soccer-inspired slot that will have you shooting for the stars with its multi-level free spins round. NetEnt have played a blinder with Super Striker! 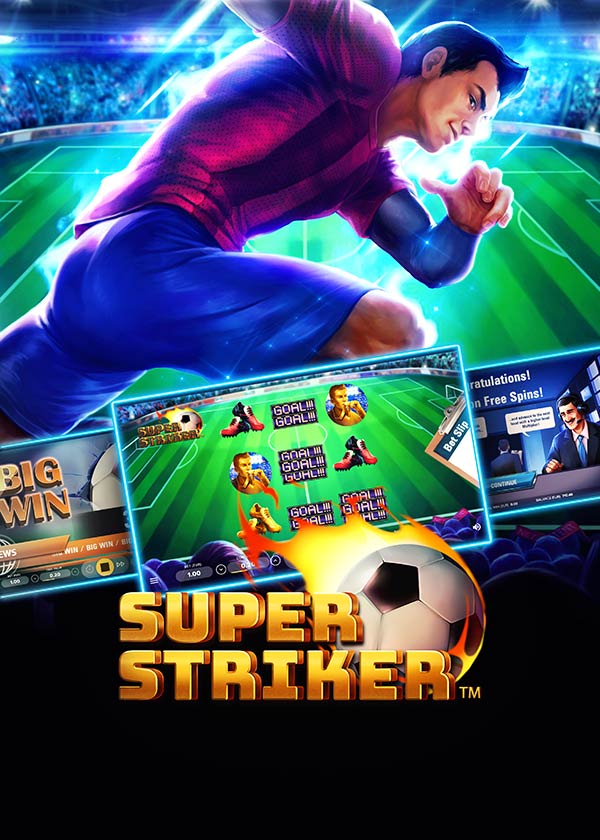 You don’t need to be a lover of the beautiful game to enjoy Super Striker. After all, this is a slot that boasts two different scatter symbols, a free spins round, a golden multiplier and the unique chance to wager on what might happen with each spin of the reels.

Super Striker is a medium volatility game with an RTP of 96.04%.

Played on a rare 3×3 gameboard, Super Striker has just five paylines – letting you wager from $0.02 to $15.00 per coin, with a number of different bet levels available.

You won’t need to dust off your boots or pull on a replica jersey in Super Striker, because the gameplay is similar to that which you will find with much of the NetEnt slots collection.

Clearly, you can only match a maximum of three of the same symbol on a payline as you only have a trio of reels to play with, and it’s in the bonus features where gamers find the most joy in Super Striker.

And don’t forget the Betslip feature. Here, you can bet on certain symbols to appear on your reels within the next 10 to 100 spins, and if you guess correctly with a maximum stake you win some 978,000 coins!

This is a slot in which NetEnt have opted for simplicity, and so there are just seven main game symbols – a variety of different ‘goal!’ icons, different colored boots and three different soccer players. It is the golden player that unlocks the highest basic game payout of 100x your stake.

But as mentioned, there are two scatters in Super Striker – the standard soccer ball and the golden ball. You’re looking to land three standard scatters or two standard and one golden to trigger the free spins round.

The free spins feature in Super Striker is multi-level, and so you can level up every time you fill your reels with the golden ball icon.

Every time you level up, the prize for spinning a golden ball increases and so too does the level multiplier, which starts at 1x for level one and increases to 10x on level five.

You start the free spins round with three free turns, and each time a golden ball appears your counter is reset to three.

Super Striker may appear a basic slot on the face of it, but the fantastic bonuses and features really take this game to the next level. From the multi-level free sins round to the cool Betslip option, every spin is an edge-of-the-seat affair.
You can play Super Striker for free in demo mode.