Want to get down and groovy with one of the slickest slots in the business? If so, you need to take a spin on the Jimi Hendrix online slot game. 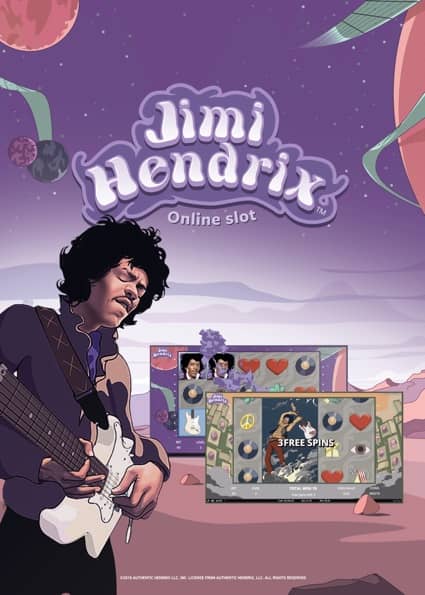 There are two reasons this spinner is a real cool cat. Firstly, the action takes place somewhere in the canyons of North America. Exactly where, we can’t say. However, what we do know is that there’s not much else around apart from the expanse of nature, you, the reels, and the music.

With nothing in the way of distractions, you’re able to focus on this slot’s second unique selling point: the music. As a tribute to one of rock and rolls’ greatest, this game gives you the full Jimi Hendrix experience. That not only means you get to see a cast of psychedelic symbols but listen to hit songs like Purple Haze, Foxy Lady, and Little Wing.

To spin the reels faster than Mr. Hendrix could shred his guitar, you need to place a bet. In practice, this means staking between $0.20 and $200. To ensure you hit the sweet spot every time you play, Jimi Hendrix slots allow you to adjust the coin value and level. This means you can change the amount you’re betting per payline and, in turn, the number of coins per payline to get an overall stake that suits you.

Few people were as cool as Jimi Hendrix and, as a tribute to the man and his era, this slot has a slick 70s vibe. From card symbols and flowers, to records, love hearts, and peace signs, this game is as retro as they come.

Then, just to make the experience even more musical, two types of guitar can help you make winning combinations, while Hendrix himself acts as the jackpot symbol. Match three or more of any in-game symbol and you’ll win prizes worth up to 400X your line bet.

Like Gun N’ Roses and other musically themed Canadian video slots, Jimi Hendrix blasts out classic rock tunes. However, that’s not all this game offers. For its encore, the Jimi Hendrix slot features a variety of special features.

Firstly, Hendrix is not only this game’s jackpot symbol but its wild. Beyond that, there are two bonuses: Purple Haze and Guitar Respin. When the Purple Haze symbol lands on the first reel, all low-value symbols turn into wilds. The guitar respin feature is triggered when four or more red Fender Stratocasters roll into view. This bonus gives you a free spin.

Finally, just to make sure this slot really rocks, there’s a mystery pick’em feature, coin-based bonuses, and a variety of themed free spin rounds. When you piece all of these elements together, the Jimi Hendrix slot RTP comes out at a heady 96.9%.

The best thing you can do when you play Jimi Hendrix slots is to have fun. The game is filled with fantastic payouts and features but they’re just the icing on the cake. With some of the best rock tracks ever recorded playing in the background, you’ll always be smiling when you spin this game’s five reels and 20 paylines.

You don’t have to be a Hendrix fan to play this game. The slot is packed with ways to win and innovative features. However, you’ve also got the added bonus of hot hits like Foxy Lady playing in the background as you spin.
Yes. Here at NetEnt Official, we let you play the free Jimi Hendrix slot game as well as its real-money counterpart.