The Aliens make a return in Space Wars 2™ Powerpoints™ Slot. They’re still wreaking havoc across space – fighting for that legendary space crystal. And you thought humans were bad! 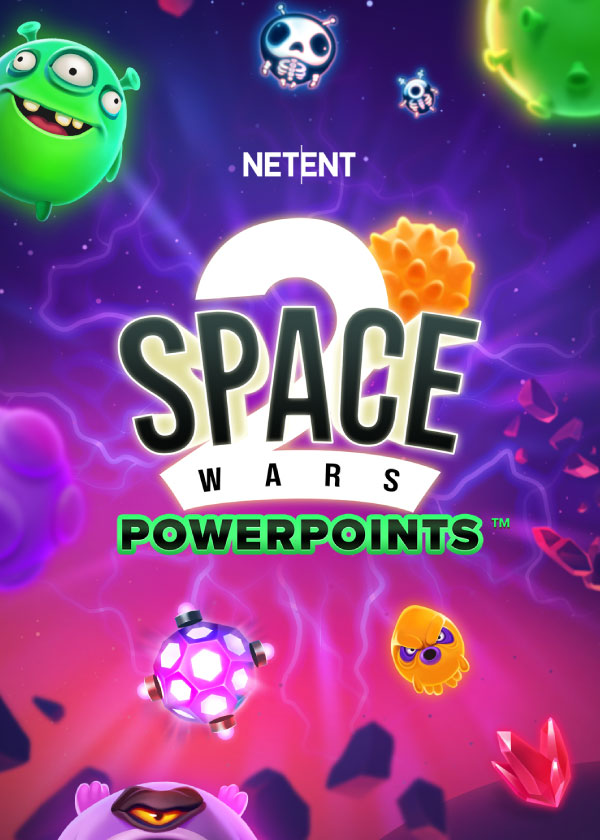 Space Wars 2™ Powerpoints™ is a sequel to the popular Space Wars™.

Space Wars 2™ Powerpoints™ is optimized for both desktop and mobile – and virtually every accessible operating system (including android and iOS). The UI is adaptable to the device and screen.

Around the symbols is the vastness of space – you get a little bit more space in the desktop version.

Discover a wealth of new games and use our online casino bonus offers to explore our collection and maybe win!

Take a spin in outer space in Space Wars 2™ Powerpoints™. Winning clusters of symbols disappear, making way for more symbols and possibly more wins! A whole range of high-tech features can be activated and can also combine in powerful combinations of features that will blast symbols to smithereens driving up your wins and Powerpoints™. More on these symbols below.

If you don’t want to wait to get into Free Spins, you can activate them with the Buy Feature. More on this below.

And if sci-fi is not your thing, there’s plenty of other video slots to choose from. Just take a look and see what you like. Or maybe you would like to try the original Space Wars™. You’ll find that game there too!

Powerpoints™ are this slot’s rocket fuel! A match win awards Powerpoints™ (according to the paytable). In both the main game and Free Spins, awarded Powerpoints™ get added to the collect meter. As you fill up the meter, you’ll move up the levels and increase your win multiplier. Payouts are based on your bet multiplied by the win multiplier.

The slot’s reels don’t spin, but rather symbols fall into position. A match win starts an Avalanche. All symbols in matches disappear, leaving space for another Avalanche of symbols.

Blast away all who stand in your way! A 4-symbol horizontal match (both in the main game and Free Spins) awards a Column Blaster symbol. This removes all symbols except for Wilds and feature symbols from the reel where the Column Blaster symbol appears. You also get a ton of Powerpoints™ added to the meter!

The Row Blaster works in a similar way. A 4-symbol vertical match (both in the main game and Free Spins) awards a Row Blaster symbol. This removes all symbols except for Wilds and feature symbols from the row where the Row Blaster symbol appears. When this happens, a ton of Powerpoints™ are added to the meter!

Now you see it, now you don’t. A 5-symbol or 6-symbol match in the main game awards a Zapper symbol. Zappers remove a number of symbol types from the reels in the following way:

In Free Spins, a 5-symbol, 6-symbol, 7-symbol, or 8-symbol match awards a Zapper symbol. This triggers the Zapper feature. Symbols are removed from the reels according to the game rules.

Ka-boom! A winning cluster consisting of vertical and horizontal matches (of the same symbol) awards a Bomb symbol (both in the main game and Free Spins). After the wins are evaluated and removed from the play area, a Bomb symbol appears and the feature is triggered.

In the Bomb feature, all symbols (except for Wilds and feature symbols) that are around the Bomb symbol are removed from the reels along with the Bomb symbol itself, adding the corresponding number of Powerpoints™ to the collect meter.

The number of removed symbols depends on the position of the Bomb symbol on the reels. If the Bomb feature affects a Mutliplier Wild symbol, it multiplies the total amount of Powerpoints™ awarded.

A 3-symbol match awards a Wild symbol that appears in place of one of the removed symbols (both in the main game and Free Spins). In Free Spins, it is also possible to land Multiplier Wild symbols. These are assigned a random value of x2, x3, x4, x5, x10, or x25. If the Multiplier Wild symbol becomes part of a match, it multiplies the Powerpoints™ awarded for the match by its value.

If you land both a Blaster symbol (column or row) and a Bomb symbol, either horizontally or vertically adjacent to each other, the Combo 1 feature is triggered! This feature removes all symbols except for Wilds and Feature Symbols from the reels that correspond to the Blaster Symbol – depending on whether it’s a Column Blaster or a Row Blaster:

A Zapper symbol and a Bomb symbol appearing horizontally or vertically adjacent triggers the Combo 2 feature! In this feature, 1 to 3 types of high/medium/low award symbols transform into Bomb symbols (along with the Zapper symbol). The Bomb symbols are then activated. Ka-Boom!

A combination of a Zapper symbol and a Blaster symbol (column or row) appearing horizontally or vertically adjacent to each other triggers Combo 3. In this feature, 1 to 3 types of high/medium/low award symbols on the reels (along with the Zapper symbol) randomly transform into Blaster symbols.

Time to start playing! We have a number of fantastic casino bonus offers and promotions running on some of the most renowned casinos across the world. Browse our offers and find out what works best for you!

Things are about to kick off. Zap! Pew! The intergalactic war has only just begun! And you thought humans were bad? Get amongst it and join the fun in Space Wars 2.

Free Spins are available in Space Wars 2™ Powerpoints™. You simply need to hit 1000 on the Powerpoints™ meter to unlock Free Spins. You can also take advantage of Free Spins with our fantastic casino bonus offers.
Aliens are a perennially popular theme. But it’s not just that. Our games artists did a fantastic job bringing these incredible characters to life.
NetEnt are among the leading casino games providers worldwide. It’s a brand that has been trusted for years by players all over the world. Every NetEnt game is certified and licensed by independent regulatory authorities that ensure that the games are provably fair and work as advertised.