Finn, Gonzo, Lady Pig, Space Wars™ Brute and Starburst™ come together for a star-studded, mind-blowing party in NetEnt’s Superstars™ slot. Beyond the luxurious Diamond Scatter symbols, the special Dice Scatter and star-speckled Wilds, this slot boasts a fabulous Bonus Game round with Free Spins and individualized Bonus Features and the fantastic possibility to enter the Final Game! Stroll down the red carpet and join this whimsical bunch for a game of 96.08% RTP, and medium/high volatility! 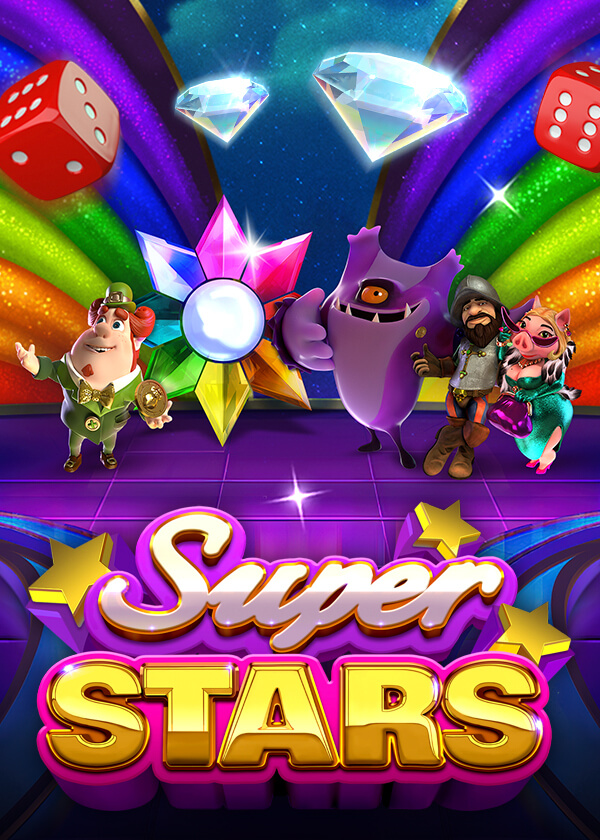 The most iconic characters of NetEnt’s history assemble for a party on five rows and five reels in a medium/high volatility game. Flashing lights, glowing fireworks, and endless fun culminate in limitless glamour. Bright-shining Diamond Scatters, star-embellished Wilds, NetEnt character-branded high-paying symbols and the convenient Buy Feature all support the same aim—entertaining you.

To join this excellent party of Superstars™, the player can bet in values ranging from a minimum wager of 0.10 to a maximum of 100.

The Wild, pierced with stars to honor the game’s protagonists, will substitute any low- or high-paying symbol to complete bet lines, except the Scatters.

The Diamond Scatters will shine brightly—if you land three or more, you will progress to the Bonus Game. (So get ready for Free Spins and the potential to enter the Final Game!)

The red Dice Scatter will replace a Diamond Scatter if it appears, only on reel 5, and will grant you a Dice roll before your Free Spins if you make it to the Bonus Game!

If you are too eager to meet the stars and cannot wait any more, you can skip the line and arrive at the party as a VIP of this 96.08% RTP game! The Buy Feature, at 150x of the original bet, will take you to the Bonus Round immediately, so get ready for some Free Spins to chase incredible Multipliers.

The player enters the Bonus Game with Free Spins when 3 or more Diamond Scatters land on the reels. If a Dice Scatter lands on Reel 5 before progressing to the Free Spins, the player receives a Dice throw as the first thing in the Bonus Round. You are about to enter a universe inspired by landmark NetEnt surroundings, where the Free Spin reels are enveloped in a board game, hovering in the air.

You will always roll the Dice whenever you have them before triggering Free Spins. The Dice score determines the number of squares the little red token can move around the Free Spins reels in the board game environment. If you step on particular squares, you can start the below Bonus Features with the most recognizable NetEnt characters!

When flute tunes float, the cunning leprechaun, Finn™, will launch his lucky clover into the air, adding +5 to as many as up to 5 Multiplier awards on the reels, combining them into a single prize.

As massive golden bricks drop from the sky, boosting up to 24 randomly selected Multiplier prizes on the Free Spins reels by 2x, 3x, or 5x, Gonzo™ will draw his saber from its sheath and swish around.

Up to 15 randomly-selected Multiplier rewards with values ranging from 1x to 5x of the stake will be placed on the reels by Lady Pig™, who is renowned for her love of splurging. If the Multipliers she throws on the reels land on already existing prizes, they will stack up on the reels.

As he awards three further respins, Brute™, the lawless little lilac extraterrestrial of Space Wars™, will create a disturbance to your device screen while operating an unidentified flying object. Additionally, he will clone three of the most significant Multiplier awards on the reels and maybe sprinkle some duplicates across his unique respins. Aren’t aliens a total nightmare?

A vertical stack of three equal Multiplier awards with values ranging from 2x to 5x will be placed on the Free Spins reels by the iconic Starburst™ Wild, the bright octagram adorned with gems.

The red token must land on the square in the top-right corner of the board for the Free Spins counter to increase to a max of 4. In addition to raising the maximum number of Free Spins to 4 until the Bonus Game is over, it will reset your counter to 4!

You will earn an Extra Life, which appears as a beating heart if you are given a lot of Dice and can move the red piece all around the board. Your heart will reset the Free Spins counter to the maximum (3 or 4) when it reaches zero.

During the Bonus Game round, if you land on the Wheel with your red token on the board, you will have the opportunity to spin the Wheel for one of the fantastic features:

The Final Game begins once all the reels have filled with random Multiplier awards. Except for two squares in the top-right and bottom-left corners, which will grant you Dice when landing on them, all of the squares on the game board around the reels will be given multipliers of 25x, 50x, 75x, 100x, 500x, or 1,000x.

At the Final Game’s beginning, you will have the same number of Dice you carried from the Bonus Game. Furthermore, all your remaining Bonuses turn into additional Dice. The maximum number of Free Spins and hearts will be turned into Dice. Your original Dice roll number will be doubled if you still have an unused Replay Feature golden ticket from the Bonus Game.

You will move the token around the playing field by rolling the amassed Dice to chase incredible Multipliers.

No trick or strategy will guarantee winning at Superstars™, similarly to any of our video slots. Nevertheless, this star-studded game is a title of incredible feature with potential to amass massive Multipliers. Additionally, the Buy Feature will launch the Bonus Game at 150x of the original wager, and once you are in the Free Spins round, if you are lucky to fill all the reels with Multipliers, you can have a go at the Final Game!

Superstars™ breaks the fourth wall—you are a star who is also welcome to this whimsical bunch! NetEnt gathered together all the best-known idols, the icons, of our landmark titles. As they emerge to the hall of fame, they are making sure to disrupt the Bonus Game for lucky players and enhance Multipliers for potentially incredible payouts. When you think there is nothing better than the Bonus Features, the Final Game will reward you for your wait, if you are lucky!
Whether you are a long-time NetEnt fan or a new person on the block, Superstars™ will enchant you without question. Try it out for free; just get a taster of the game mechanics and features, and have uncommitted fun. However, beware, Miss Banks’s penchant for making it rain is infectious!