We hope you like your food spicy, and your slots picante! A fiery feast awaits you in Willy’s Hot Chillies™ . This spicy tortilla slot is filled with Multiplier Wilds and a tasty bonus game added on top! Don’t forget to check out our collection of other great video slots! 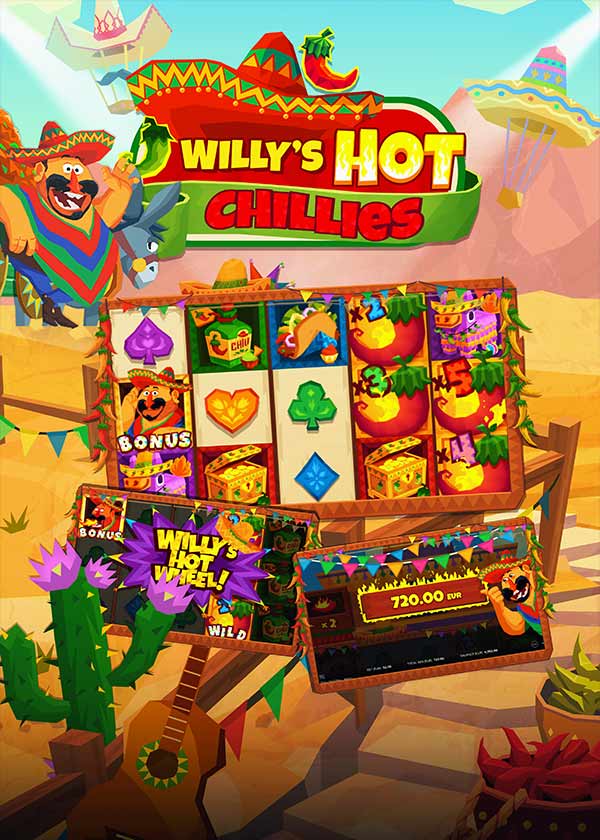 In this Bonus Game, Reels covered in Wild symbols transform into pointers. These fiery pointers point to a carousel of great features, including coin wins, extra pointers, extra spins and juicy multipliers.

How to play Willy’s Hot Chillies

Load up the game, hit spin, and cross your fingers! Winning combinations and payouts are made according to the paytable. Symbol payout values are also found in the paytable. High-paying symbols in this game are the treasure chest, the pinata, the bottle of green chili sauce, and the taco. Classic royals are the low-paying symbols. The curly chili is the Multiplier Wild.

Willy’s got a few special treats for you in the Willy’s Hot Wheel Bonus Game. Here’s what you can unlock in this game:

Coin Win: This awards a random coin win between x1 and x30 times the bet.

+3 Spins symbol: Add 3 Willy’s Hot Wheel spins to the Fire Pointer that landed on this symbol.

So many great ways of making big wins and bringing home the bacon (or in this case, the chili).

There are some things in life that are always better together: garlic and food, beer and sports, Multiplier Wilds and slots! This game does not disappoint. Multiplier Wilds can appear on reels 2 – 5. Stacks can cover from one position to the entire reel, depending on how the reel lands.

We have a number of fantastic casino bonus offers available for you that include great Free Spins offers. Have a look at our collection and see what you can find.

In the Willy’s Hot Wheel feature, you’ll notice the Chili Multiplier on the side. In the center is the carousel that carries a number of fantastic winnable items.

This is a burrito of a slot filled with juicy big wins. Take a big bite out of Willy’s Hot Chillies™!

This game is available to play for free. Simply scroll up to the top of this page, give the game a few spins, and experience the various bonus features in the game.
Check out our fantastic bonus offers to find out what Free Spins bonus packages we have available on this game.
Yes: Willy’s Hot Wheel feature. To get into this bonus game, land a Bonus symbol on reel 1 together with one or more stacks of Multiplier Wild symbols covering an entire reel.