Have you ever stared up at the stars and wondered what’s out there? Well, it’s not pretty. There’s a war going on, and it’s time you played your part. Space Wars™ Slot gives you the chance to be more than a mere Earthling by joining the finest Galactic Force in the Universe. 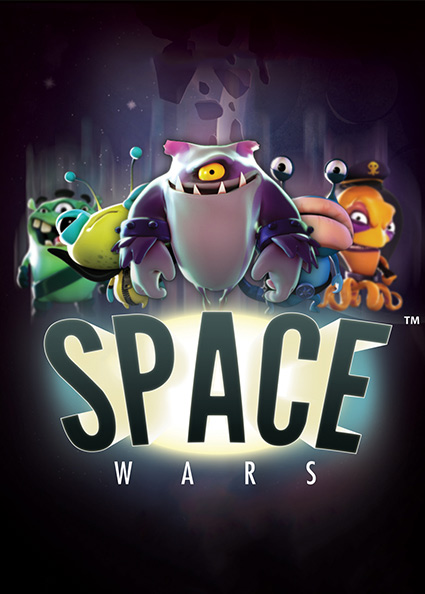 Space Wars™ is a fast-paced, exciting, 5-reel, 4-row, 40-line slot. The slot features Wild substitutions and free re-spins. In Space Wars™, the winning symbol is cloned and stacked on the reels giving the potential for even bigger wins.

This slot was released way back in 2013, and was the first tour de force of Brute. Brute quickly developed a reputation as being NetEnt’s most lovable and most purple Alien character – but despite his roguish charm, he is not to be trifled with! Check out other games in our collection by visiting NetEnt’s video slots page.

When a winning bet line is formed, the winning symbol gets transferred to the cloning pod which is on the right side of the screen. The winning symbols then get shot back onto the reels. A re-spin is awarded – did someone say big wins?

Space Wars™ does not have in-built Free Spins, but you’ll forget all about that when the Re-Spin feature starts forming lines of winning symbols on the reels. 1,000 times your stake can potentially be won on every spin/re-spin.

Space Wars™ offers an exciting and unique Re-spin feature called the Cloning Pod Re-spin. Completely unique to this game, whenever you manage to land a winning combo on a payline, the winning icons will pop up on the Cloning Pod. Any winning symbols get cloned and are placed back directly onto the reels, thus awarding a Re-spin which can offer up some massive wins. It activates relatively often too, awarding as much as 1000x per stake.

There is no Free Spins feature available, but the fast-paced Re-spins feature more than makes up for it.

But if Free Spins and bonuses are your jam, then head over to our casino bonus page to see what’s on offer.

Stacked wins in abundance. Re-Spins galore. Cute aliens! Give up your human ways and join the great galactic war.

Finn and the Swirly Spin