If you’re a lover of rock and enjoy playing slots, Motӧrhead™ is a great choice for you. The theme of the game is based on the legendary rock and roll band, Ian “Lemmy” Kilmister and his boys. 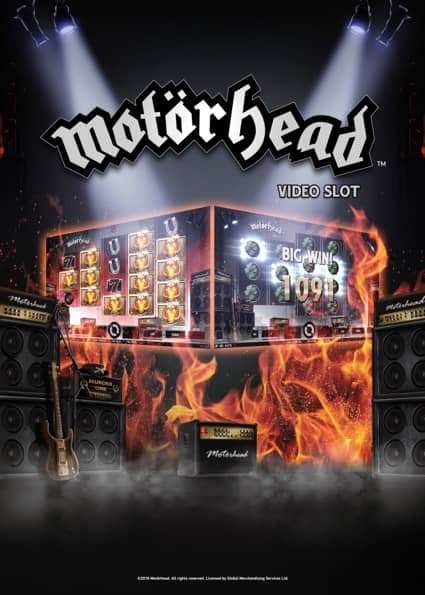 From the reels to the soundtrack, you will surely have a good time playing this slot. As a 5-reel and 76-payline (fixed) game, you will find amazing features such as Free Spins, a Mystery Reel feature, Wild Substitutes, and a Bomber feature. Motӧrhead™ slot games should be played on loudspeakers for an exquisite and thrilling gaming experience.

Motӧrhead™ is a 5-reel game that offers an impressive 76 paylines. The game itself is based on the legendary rock band and has a number of symbols that match the theme, immersing you in a Motӧrhead™ concert.

When it comes to the look and feel of the game, we have really tried to throw you into the thick of it all. The reels are set on a live music stage and it’s the amplifiers that border the reels. Turning up the ‘Rock Mode’ feature to the side of the reels will ensure that you get Motӧrhead™ tracks blasted at you as you spin the reels.

Playing Motӧrhead™ video slot is easy. You have to set the betting level, which is the number of coins you want to bet per payline, and it ranges from 1 to 10. The coin value used in the game is 0.01 to 1.00, and this makes the minimum bet $0.20 while the maximum is $200. Once you’ve placed your bet, you can click on the spin button to start the game. Just as with most of our slots, we have also included Autoplay and Max Bet feature in the game. You can play Motӧrhead™ on your mobile devices too.

Playing Motӧrhead™ is a walk in the park as all you have to do is click spin once you’ve selected your bet. Everything is down to luck in a slot, so you just have to hope that 3 matching symbols will land on one of the 76 paylines thus giving you a win.

Motӧrhead™ slot was released in 2016, and its symbols do perfect justice to the theme of the game. The highest paying symbol during standard play is Lemmy, and it rewards 150x when you land 5 of it on a payline. Other symbols to watch out for in the game are the Lucky Sevens, Bells, Stars, Cherries, Clovers. An Ace of Spades represents the Wild symbol, and it replaces every other symbol when you land it on the right reels.

The Mystery Reel consists of both standard symbols and mystery symbols (stacked). When the spinning reel halts, the mystery symbols transform into regular symbols. The Bomber feature can be activated only in the base game and it occurs randomly. When activated, bombs occur on the game reels and it forms a minimum of 10 mysterious Overlay Symbols. The maximum number of bombs in this mode is 5 and it can form up to 15 Overlay Symbols. These mystery symbols transform the same way it does in the Mystery Reel mode and it can increase your winning chances exponentially.

Motӧrhead™ slot is a medium variance game, and it promises lots of fun. You can play the game in free mode on our website. This way, beginners can easily learn how the game works, and professional players can test their gaming strategies. The colorful visuals and awesome rock soundtrack will make you feel like a rockstar. With RTP of 96.98%, you can expect to make really good wins playing the game. The special features of the game also add to the unending entertainment. Why not play the game for money at one of our online casinos today!